Sad news for Hanga Abbey this month. On February 16th, 2013, Frater Anselm of Hanga Abbey died. born in 1937 and joined Hanga abbey and made first monastic profession, then still a priory, in 1960.  Frater Anselm have had bad health for serveral years, more than ten years. He was particularly troubled by diatetes and high blood pressure. His health turned to the worse since three years ago when he could no longer take care of himself due to physical incapacitation. In May 2012 he had heart stroke which made him even worse. Early January this year, 2013, he was taken to Peramiho hospital as he was seriously ill where he passed away.
Frater Anselm was known to be very talkative person and never feared anybody to speak his mind. Particularly, he will be remembered by many Nuns, for whom he was very instrumental in sending them to convents when they were girls. He was a good teacher of religion. He had a great desire of being a permanent deacon and becoming a certified teacher neither of which, unfortunately, materialized for him. On top of all these Frater Anselm was a man of great faith. He valued his monastic vocation so much, he celebrated the Liturgy of Hours so well, never missed attending holy office for lame axcuse. We pray that now he is in jubilation before God singing with the Angels. May he rest in peace.

In the photo Frater Anselm in cassok and hat with his friends from Austria, Mr. Fritz with his wife, who visited him in 2010 at Hanga Abbey. 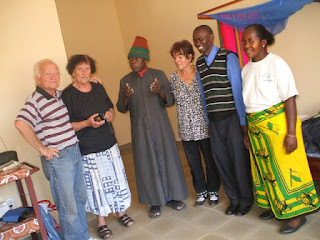