Hanga Health Center Gets Attention of the Government Officials

Hanga Dispensary run by Hanga Abbey was elevated into Health Center at the beginning of this year 2013. With that status the center can legally admit patients in bedrooms for treatment and can have a resident Medical Doctor for minor surgeries. For that matter the regional head Medical Doctor and District Medical Doctor have visited the new construction site for surgery this November for some recommendations before the construction proceeds. The two officers were recommended to visit the site by the Ruvuma Regional Secretary who visited the site accompanied by the 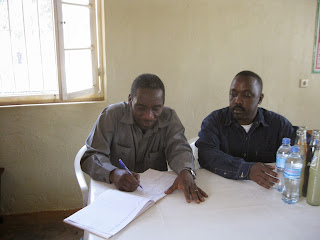 senate member of Namtumbo Mr. Vita Kawawa. We thank all the benefactors who have made this surgery unit come into existence; still not finished but it is getting there!

Above the regional secretary is signing a guest book at the Health Center. Below is Mr. Vita Kawawa, the senate member of Namtumbo, signing the guest book. 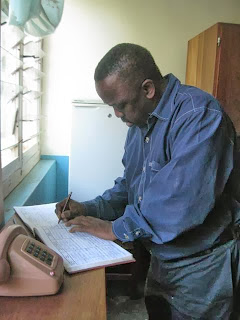 Posted by Hangablog at 8:22 PM No comments:

Dear friends and valued readers of Hanga Abbey website,
From the abbey web administration team we would like to inform you that soon our website will look different; of course the contents of the web will be the same. You will notice the following changes.
With the changes we hope you will find surfing our web interesting and user-friendly.
By the administration team.

A graduation ceremony was held at Hanga Trade School on the 16th November, 2013, for 20 graduates, who had finished four years of training in different trades. Of the twenty graduates five were girls. Congratulations to them all for their achievement and we wish them success in life with their trades.
On the graduation day the new dormitory rooms for boys was officially enaugurated with the blessing by abbot Thadei Mhagama, OSB, who was also a guest of honor for the event. Thanks to all the donors who contributed to erect the structure. 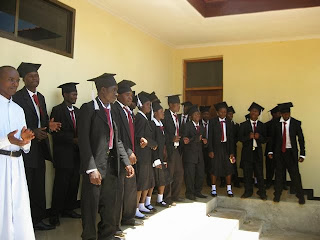 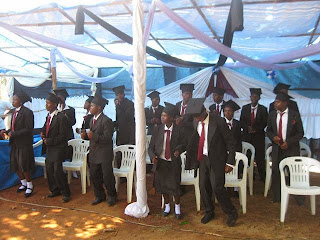 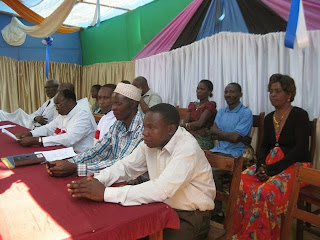 Frater Patrick Mwinuka, OSB, head of Hanga Trade School, is giving a speech during the graduation ceremony. To his right is Abbot Thadei Mhagama, OSB. 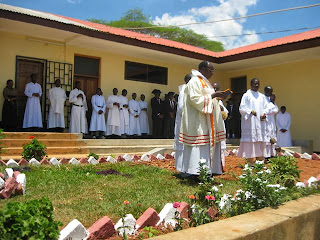 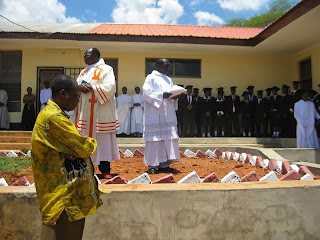 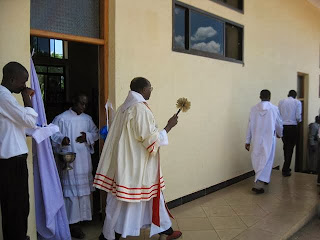 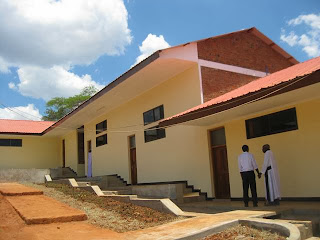 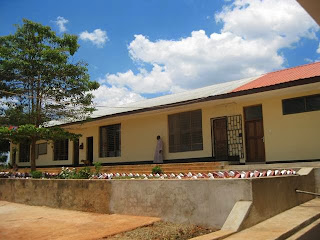 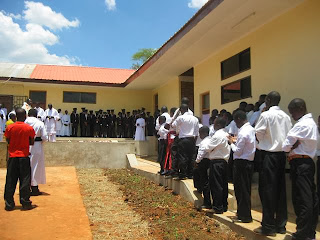 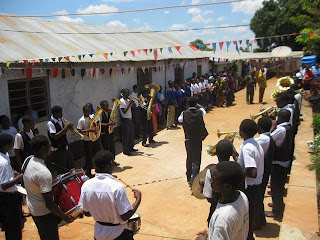 A group of students of medical doctors from Italy by the name Students Without Frontiers have shown interest to work with and help health services in Tanzania. The group has signed contract service with Hanga Health Center and Namanyere hospital in Sumbawanga, southwest of Tanzania. At Hanga the contract was made in this November by a mutual signing of it by Abbot Thadei Mhagama, OSB, the abbot of Hanga Abbey and Dr. Patricia D. Matteo from Italy, a representative of the Italian Students Without Frontiers. With the service of surgery and blood transfusion coming it will be a great leap in serving people particularly women in labor and anemic children.
From Italy Dr. Patricia was accompanied by two students of medical doctorate: Gaia Russo and Sara Riggi. After a month of stay at Hanga a farewell party was held for the three visitors early November.
We thank them for their willingness to help the needy in Tanzania.

In the picture Abbot Thadei Mahagama, OSB, with Gaia, Dr. Patricia, and Sara during the signing of the service contract. Br. Lucius Matembo, OSB, the head of Hanga Health Center, was also present at the event. 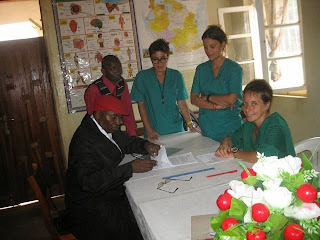 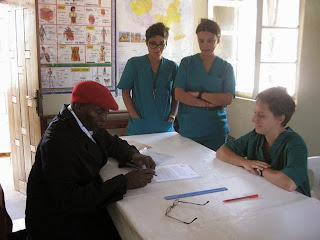 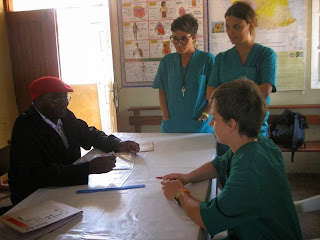 A farewell party was held for the visitors from Italy 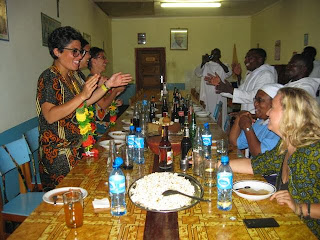 From left to right: Gaia, Sara, and Dr. Patricia 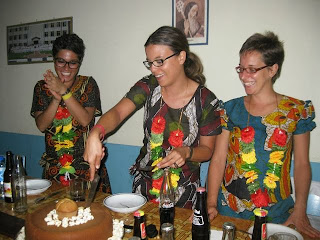 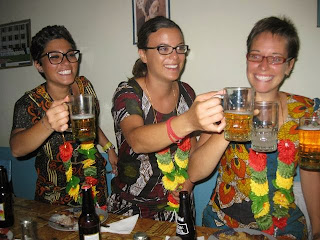 Posted by Hangablog at 10:19 PM No comments:

With great sadness, monks, villagers, teachers and students of St. Laurent Primary school, late morning of Monday November 4th witness helplessly as fire raged in the dormitory for boys of St. Laurent school. So far the cause of the fire is believed to a fault in electrical system. No arson is involved. Luckily there was no human injury or death by the fire. Lack of water and fire trucks in the rural area made it impossible to put off the fire at its early stage. People tried to extinguish the fire with water in buckets, but it was nothing to the raging fire. By the time a fire truck from Songea town arrived at the scene the facility was completely burned. 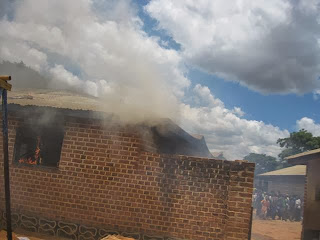 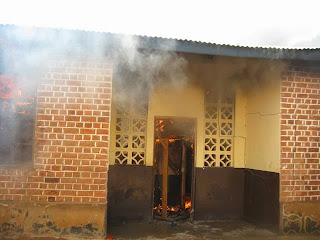 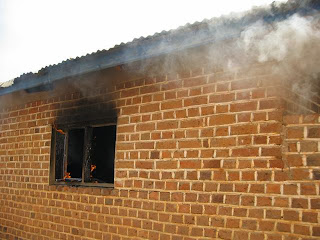 People watched helplessly as the building continued to be burnt. 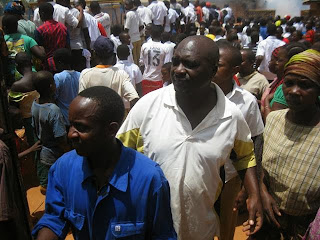 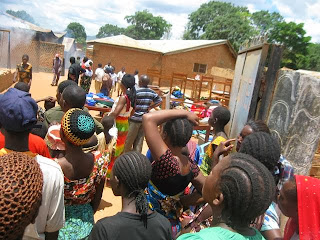 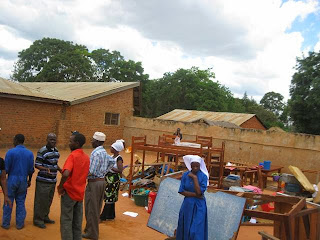 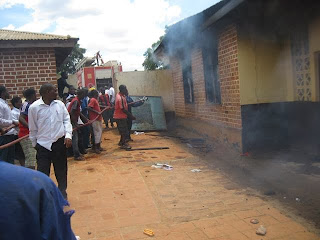 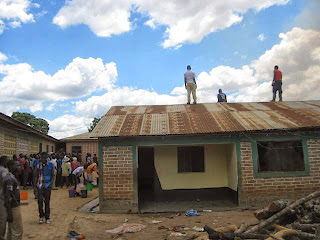