A Pastor Gets Donation to Help Orphans

It began with our reporter, Frt. Lucius Matembo, OSB, who happened to visit Mgazini parish in the archdiocese of Songea in southern Tanzania. He found Fr. Pius Nchimbi with an assistant Sr. Siri, OSB, taking care of orphans and kids literally abandoned by their parents. Fr. Pius, the pastor of this Roman catholic parish church, realized the plight of these kids with no one to take care of them, not being sure of what to eat, what to do from day to day, decided to do something. In the old dilapidated buildings left by missionaries, with meager funds, he made minor repairs and got the children stay there under the care of Sr. Siri, OSB, a nun from Chipole convent in the archdiocese of Songea. For sure the children did not have splendid life but at least they were safe and able to eat.
For some reason Frt. Lucius was able to sneak their photos and bring a word of need for the children to the US and the Pastor's struggle of taking care of them. Indeed there are good people out there. People donated funds to the children. With the funds Fr. Nchimbi was able to buy for the children new uniforms, beds, mosquito nets, chairs, tables, table ware for the children and playing items. Thanks to the benefactors and thanks to Fr. Pius Nchimbi and Sr. Siri, OSB, for dedicating their efforts to serve these little ones. Thanks also to Frater Lucius for getting a word out about these needy children.

Compare this photo of children taken before they got assistance. In it the adults are Sr. Siri, OSB, Frt. Lucius, OSB, and Frater Gabriel Wangabo, OSB, with the children

In the photos; Fr. Pius Nchimboi, Sr. Siri, OSB, with the children in their new uniforms, new tables and chairs, and new table ware! 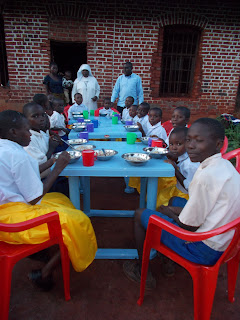 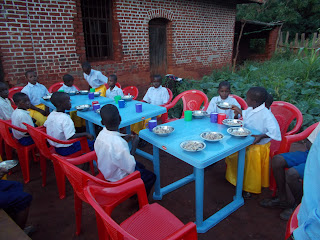 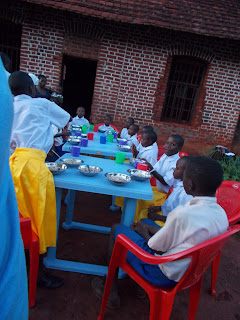 The children in new uniforms and each holding new mosquito nets. See also the matresses and beds on the left. 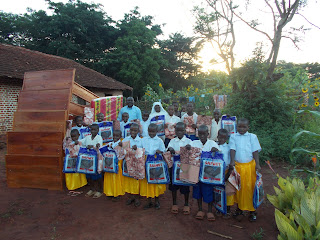 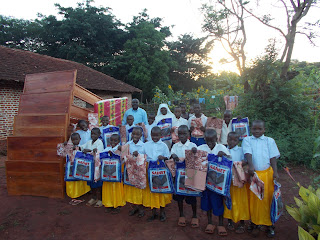