It is that time of the year for Ordinary Level Secondary Schools in Tanzania to say goodbye to the Form IV students having completed their secondary school education. At Hanga Seminary, run by St. Maurus Hanga Abbey, there were 32 seminarians graduating. Some of these young men will go on to become monks, some will be priests and some, hopefully, very good and well formed catholics. This year's graduation was held on the 22nd of October at the seminary grounds. The guest of honor was Fr. Christopher of Mbinga diocese (in southern Tanzania).
In the photos: the graduating class with gifts from relatives, Fr. Chrysostom, OSB, giving a speech with the guest of honor on his left and our reporter Frater Lucius further left. 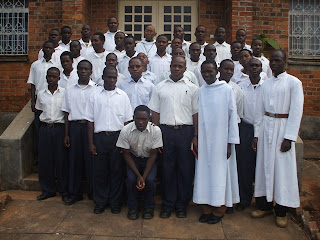 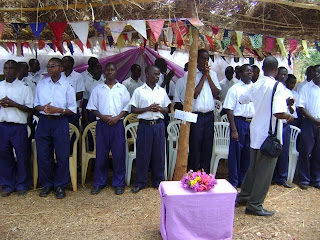