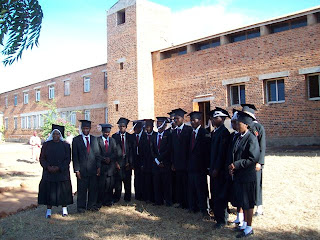 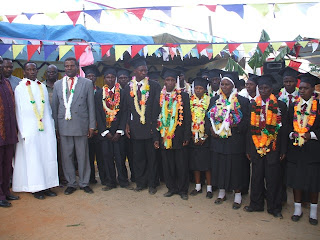 At Hanga Trade School this year 2010, on the 13th of November, 17 young men and women graduated with skills ranging from masonry, to carpentry, plumbing, automechanics, tailoring and electrical installation. The different skills learned during four years at school make them ready for self employment or be employed. It is nice to know that one trained in the trades can never lack a job unless he/she decides to do so. We wish them success in their lives!!
In the photos: above - the class of 2010 graduates. On the right from left is the guest of honor and Frater Parick Mwinuka, OSB, (in white cassock) the head of the Trade School posing with the graduates.
Below: some graduates receiving their diplamas from the guest of honor 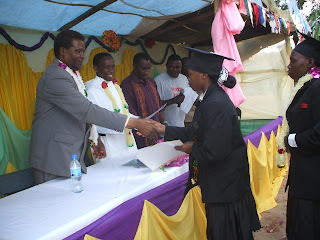 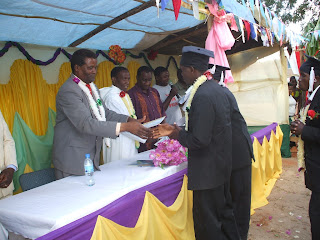 It is also worth noting that in this group of 17 graduates, there were two Benedictine nuns, Sr. Anita and Esther Ngowi, of the Camaldoles from Iringa (in the southern Highlands of Tanzania) who graduated in automechanics and plumbing respectively. Below: right - Sister Anita is holding her certicate after receiving from the guest of honor, and left- Sister Esther Ngowi is holding a gift box. 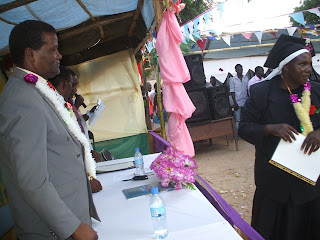 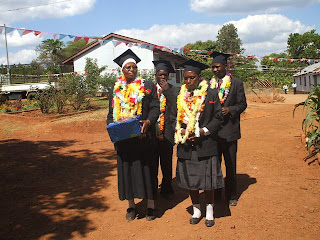 Posted by Hangablog at 9:48 PM