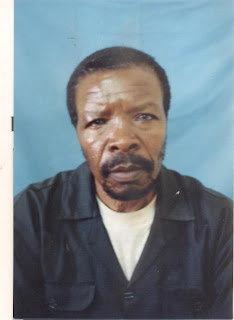 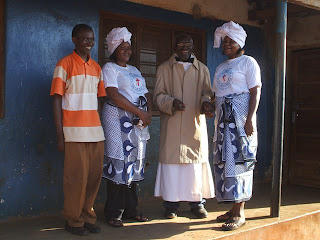 A former employee of Hanga Abbey Mwalimu Abel Zenda died this December after suffering from heart attack aftereffects and numbness for about two years. Several monks of Hanga Abbey including former superior Gregory Mwageni, OSB, Frater Lucius Matembo (former student of Mwalimu Zenda) attended the furneral. Mwalimu Abel Zenda was a headmaster at Hanga Seminary when the seminary was an elementary school back in the seventies. He was a tireless formator and never extradited a student for disciplinary matter. He knew how to shape troublesome students for which reason he was nicknamed by students "brashi ya chuma" meaning "iron brush!!" May he rest in peace!
In the pictures; left Mwalimu Abel Zenda. Right: Frater Lucius (our reporter) with two daughters of the late Mwalimu Zenda and Fr. Gregoru Mwageni, OSB, in cassock, the former superior of Hanga Abbey who employed Mr. Zenda.
Posted by Hangablog at 8:51 PM