During the last week of April and the first week of ,2013,US citizens came to the abbey to offer a training in making water hand pumps using plastic (pvc) pipes. Mr. Tom Fitzpatrick with his son Brendan and Mr. Steve Doverspike all from Burns in Oregon, USA, offered their expertize of making pvc pipes to monks, some villagers and students of plumbing from Hanga Trade School. The exercise was very successful. All who attended the training were overjoyed and so were the trainers. In the photo Mr. Tom with his son on his right and Sr. Remigia, OSB and Mr. Steve Dospike on the left. 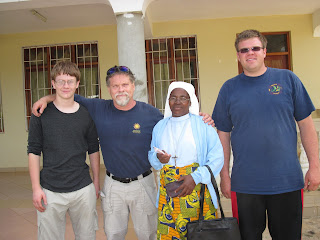 Basically, the pump consists of a cylinder and a piston both made of plastic materials. In the pumping mechanism a valve that lets water out and keeps it from returning back is a marble (commonly called goroli in Swahili). A basic pump with a handle connected to a piston inserted in a cylinder;the water comes out though one side of the handle. 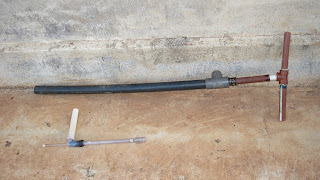 The trainers have the hope that this simple technology will spread to many Tanzanians so that they use the pumps to pump water for irrigation and most importantly that they can pump water from wells that have been dug by hands without the need of immersing a container and that the wells can be sealed to prevent them from contamination from debris and running rainwater. Mr. Tom with a student checking a pvc pump before immersing it into water for pumping. 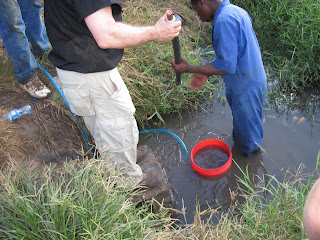 The trainers also taught the learning group on how to drill wells by drill that can be constructed locally and connected to sections of pipes during drilling depending on the depth of the pit/well depth.
In the picture below Steve and Tom are connecting water pipe to a drill. 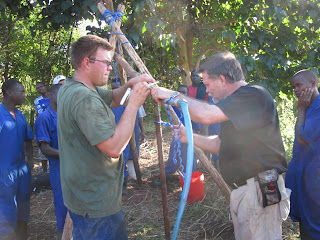 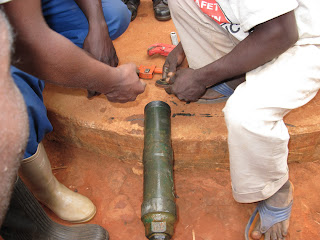 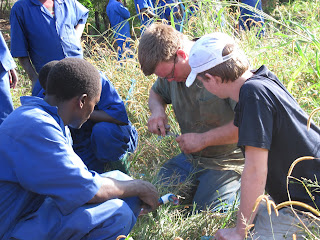 Posted by Hangablog at 4:33 AM