It was on May 15th after midday prayers at the presence of monks and priests of the archdiocese of Songea when the surprising news came. The archbishop was accompanied by the bishop of Iringa a neighboring diocese who now is the administrator of the archdiocese. the breaking of the news was announced at Hanga Abbey because the priests of archdiocese had gathered there for their special seminar in celebrating this year of faith. Thus it was an official and the right group for the news to be announced.
Abbot Thadei Mhagama, OSB, the abbot of Hanga Abbey giving an address at the refectory (with monks) on the day archbishop Mtega announced his resignation as an archbishio of Songea. 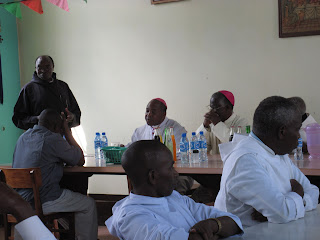 Below from right: the retired archbishop Norbert Mtega, Bishop Tarcisius Ngalalekumtwa of Iringa (the president of Tanzania bishops) and Fr. Gregory Mwageni, OSB 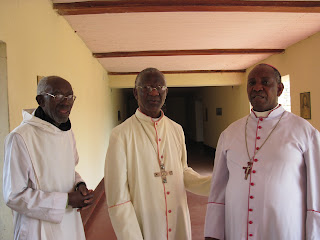 In the photo are some priests of the archdiocese of Songea who attended a seminar. 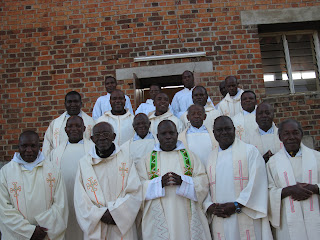 Posted by Hangablog at 5:27 AM