Hanga Abbey Hit Hard by the Deaths of Two of Its Loved Ones.

It has been very hard for the monks of Hanga Abbey to witness the death of their members Frater Marko Nchimbi, OSB, and Frater Pascalis Mkalawa, OSB. The two Brothers died within five days. 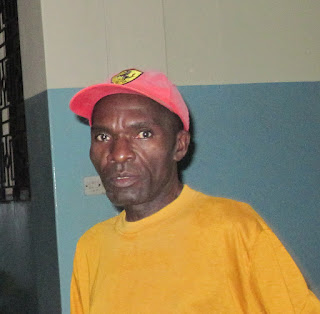 Frt. Markus died on June 2nd, 2012, of liver concer. He was born in 1959. Frater Marko has had long history of bad health associated with lung fungal infection. Last March 2012 he was diagnosed with liver cancer. All efforts made could not save his life. As a monk he was involved mainly in formation of young monks. He was able to do this job very well due to his background as a techer and training in monastic life a training he did in Rome for a year. At some point he spent time to teach novices in the daughter house of Hanga Abbey in Katibunga; also he led seminars for monks in formation in the abbeys of Tanzania (Peramiho, Ndanda, Hanga and Mvimwa). Frater Marko was a quiet person but had a great sense of dry humor. And although he was quiet a person he knew so many stories and secrets that one cound not imagine. He will be missed due to his sense of humor. May he rest in peace! Above is a photo of Frater Marko Nchimbi, OSB.

Frater Paschal Mkalawa, OSB, died on the 6th of June, 2012, five days after the death of Frater Marko. He was born in 1941. Made his monastic vows in 1968. Frater Pascal has been suffering from heart problems for about four years. It is due to this problem that he finally succumbed to death. Frater Paschal will be rembered by the monks of Hanga as an excellent driver who never had an accident. He was trained and worked in the automechanics shop of the abbey. He spent a few years in Katibunga, Zambia, working as an automechanic expert at the priory there. 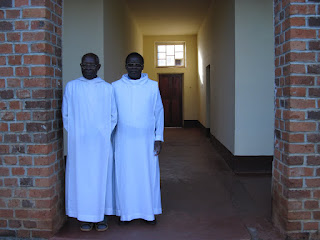 May he rest in peace! In the photo below Frater Pascalis (left) with Fr. Ildefonce in a recent photo taken at Hanga Abbey in May 2012.
Posted by Hangablog at 1:07 PM