Toward the end of October this year 2012 Hanga Trade School said goobye to 14 graduates who had fininished their four years of training in various trade workmanships. These include masonry, carpentry, automechanics, electrical istallation, plumbing and tailoring. Of the 16 students two were women. We hope more girls to be joining the school as years go by. Particularly interesting, was the fact that each graduate was given a present of tools of their the particular trades they learned; that way these young people are equiped to be in employment right away by self employment or being employed. It was amazing. Congratulations to the school administration for all they did and do for these young people. The guest of honor for the graduation was Br. Vianey Fuli, OSB, from Peramiho Benedictine Abbey. He was presented by an office chair with inlay decoration work of the cartentry graduates.

In the photo is the graduating class of 2012 wihth Frater Patrick Mwinuka, OSB, in white cassock. Right: some graduates with their friends and relatives. 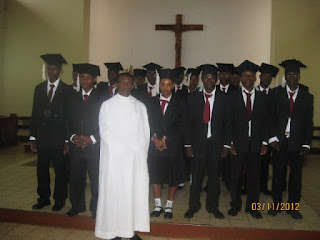 Students in church for thanksgiving mass 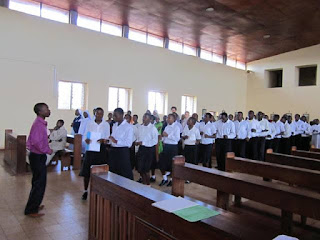 Br. Vianey Fuli, OSB, is giving his address as a guest of honor. 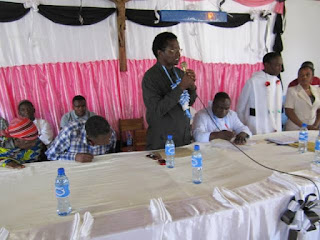