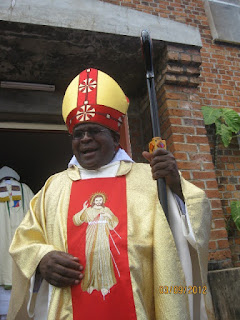 The former and first abbot of Hanga Abbey, retired in 2004, celebrated thanksgiving mass and reception at Hanga Abbey on 3rd September, 2012. Abbot Alcuin Nyirenda, OSB, was ordained a priest in June 1997 and headed Hanga abbey as an abbot from 1994 to 2004. A man of great ambition and vision with many talents, while he was a ruling abbot did much to improve the monastic office liturgy. He composed novel music for Compline and made new liturgy for the office of the dead. In terms of economy his legacy lives in the buildings in Songea town where the abbey has stores for business and renting. Not to forget abbot Alcuin pioneered the establishment of water bottling facility in Njombe mountains about 500km north of Hanga Abbey. We thank abbot Alcuin for his great contribution to the abbey of Hanga. We wish him many more years of blessings and service to God and His people.

In the photo below Abbot Alcuin at mass as he celebrated his ordination jubilee. 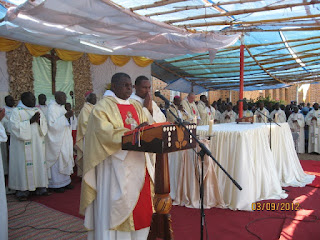 Posted by Hangablog at 9:18 PM