A man of the people, Fr. Gregory Mwageni, OSB, was the first superior of the independent Hanga Abbey. He is the only living of the four pioneer monks of Hanga Abbey. His felow pioneer monks were Frater Bernard Monji, OSB, Frater Joseph Kinunda, OSB, and Frater Bonaventura Malibiche, OSB. This year 2012 Fr. Gregorey Mwageni celebrates 90 years of age. The 3rd of September 2012, on the feast of his patron saint Gregory the Great, was a day of special celebration at Hanga Abbey for his anniversary. The monks of Hanga Abbey owe Fr. Gregory a lot of thanks for his dedication to the abbey and the sound spiritual foundation he has laid for the monks as the first superior of the independent monastery since 1975. Fr. Gregory is also well loved and respected by villagers all around Hanga Abbey. Since when he was a superior to the present many people from near and far from Hanga Abbey come to Fr. Gregoryfor spiritual direction and counseling and advice. Hespends most of his time with people. He cares about people and works for the peoples well being. He is truly a man of the people. In the photos below one can notice that Fr. Gregory is always with people. 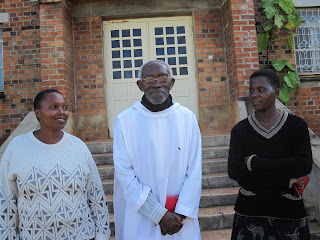 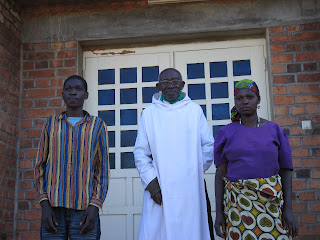 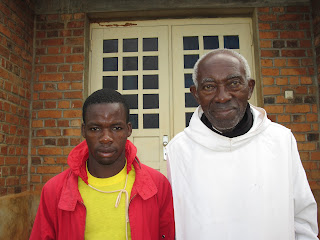 Posted by Hangablog at 2:58 PM