Hanga Village Gets a Transitional Deacon

On January 6th, 2011 in the Archidiocese of Songea (in Southern Tanzania where Hanga abbey is located) were ordained eight men to deaconate to be ordained priests sometime after June this year. Among the eight men was also a native of Hanga village Mr. Gaston Milinga. His early childhood was very much influenced by Br. Agustino Mgedzi, the monk of Hanga Abbey. 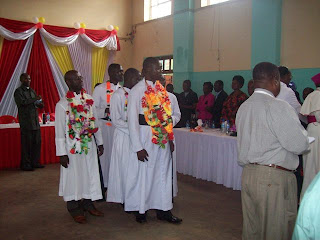 Congratulations to Deacon Gaston and we are looking forward to his ordination to priesthood.

In the photos: above deacon Gaston Ngonyani (center) with other deacons after ordination mass at Songea. Below from left Abbot Thadei (of Hanga Abbey), deacon Gaston, Br. Agustiono, Fr. Elias Chale (pastor of Hanga parish), and Prior Odo Nanyanje at the abbey when the monks had dinner to congratulate deacon Gaston Milinga. 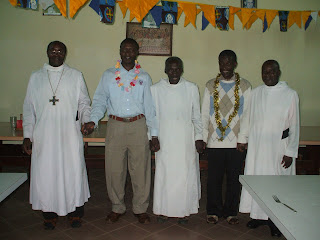